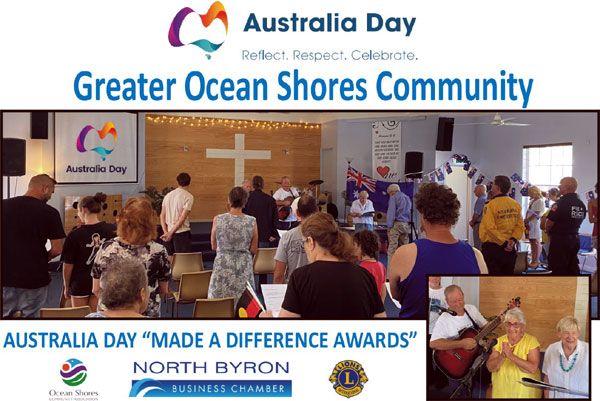 The Ocean Shores Community Association (OSCA) and the North Byron Business Chamber began a new Australia Day tradition in 2021 by honouring citizens and organisations who “Had Made a Difference” to the wellbeing of the Ocean Shores town and district.

Honour was paid to former residents who had made a difference, among them former Byron Councillor Arthur Todd founder of the Ocean Shores Country Club and wife Gladys, long term Ocean Shoes residents. Frank Mills OAM – Frank is an historian, author, former Byron Shire Councillor, fire chief and former president of OSCA. Nola Lake made an outstanding contribution to the health services of the shire and was involved in the expansion of the Feros’ Retirement villages.

The Australia Day Ambassador appointed by the Australia Day Council for the 2021 Byron Shire celebrations is Brad Farmer AM. Brad was awarded the Member of the Order of Australia for his lifetime of distinguished voluntary service to communities, conservation and coasts and has the title of Australia’s Beach Ambassador, bestowed by Tourism Australia. Brad told us that Australia has 11,761 coastal beaches, most of which he has visited! He is now looking at our river beaches.

Mullet Throwing Contest 2020:
There was no mullet throw this year but Champions from 2020 were presented with their trophies by the Ambassador. Last year’s Senior Men’s Champion with a throw of 45.2 m was Damien Mowbray and Matthew Mangleson runner up with 41.1 m. As well, Senior Women Champion Jane Rankell won with a throw of 18.4 m. Under 10 Girl Kodi Mangleson’s winning throw was 19.7 m, runner up Ella Cheek at 11.4 m. Under 10 Boy Noah Wakl won at 19.2m, and Under 16 Girl Honey Mowbray at 16.3m. Other 2020 winner’s awards are available please contact OSCA at 0431 477445.

Representatives of the SES, The Ocean Shores Billinudgel Rural Fire Brigade, the Brunswick Heads Fire and Rescue, and The Mullumbimby Brunswick Lions Club received the community’s thanks and recognition for help in the past year’s disaster resilience response.

Also receiving awards were dynamic duos Judy and Jim Anning for management of the Ocean Shores Estate and archivist protection of records; Colin and Vicki Loomes founders of “Shores United” Ocean Shores junior soccer and Brunswick Heads Nippers, and for survey work on the original Ocean Shores town Masterplan; Tina and Stan Petroff caring for town parks and open spaces in Tidy Towns, past President and Secretary OSCA, and the community committee for the maintenance and management of Waterlily Park and the popular children’s playground, “Playscape”; and Lisa and Mark Russell for services to local media, history and communication and the publication of the Annual Brunswick Valley Community Booklet.

As a community we acknowledge that they all have “made a difference” in our town and thank them for their services.