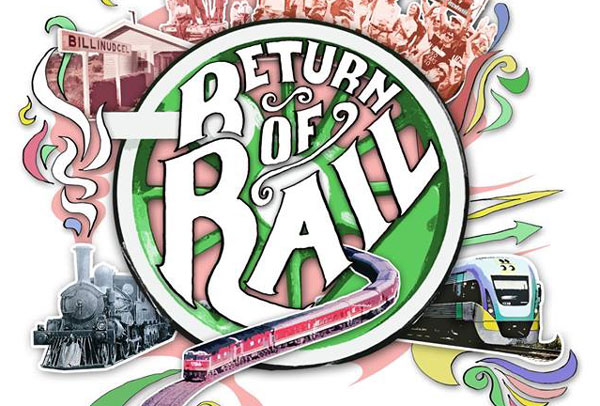 An invitation to attend the return of rail rally next Sunday 10TH March at Billinudgel.

Ocean Shores is celebrating its 50th Birthday this year with a number of events in March including a rally on Sunday next 10th March for the Return of Rail in the Northern Rivers. The huge majority of people in the Brunswick and The Pocket Valleys are calling for the return of the rail. We no longer enjoy the rail services of the past. This was taken away in 2004 following over some years a deliberate reduction of services and late night timetables designed to falsely establish loss of public support for rail. In the ARUP feasibility study no mention was made of the value of tourism in the Northern Rivers, at least $3.8 billion each year. Neither was the 2.2 million visitors coming to Byron Bay each year, nor the value to the local economy of the three major festivals in the Byron shire which could make use of the rail services. As well the cost of re-establishing a rail service was deliberately misrepresented.

The push to remove the rail tracks and replace with a bicycle track requiring only a small corridor is the beginning of the loss of the statutory rail corridor that still exists from Casino to Murwillumbah. There is no comparison. The bicycle trail is a poor substitute, a deception by people who want to sell and take over railway land and a $3/4 million yearly maintenance allowance. The railway corridor is protected by legislation. It will require a fight in parliament to change the rail zoning to community land which can be sold. Yet it is presented as a fait accompli, a done deal. Far from it.

We are inviting all State election candidates to attend next Sunday from 3pm to 6pm when there will be an opportunity for candidates to speak to Ballina electorate constituents, and to hear from speakers in favour of rail. We invite you to speak about your opinion on the proposed rail line closure and be presented with a community petition in favour of the return of rail.

The Ocean Shores Golden Jubilee committee consists of the Ocean Shores Community Association, North Byron Business Chamber, Brunswick Valley Lions, Ocean Shores Public School, Ocean Shores Art Expo, Ocean Shores County Club, North Byron Parklands and many local businesses.
The Ocean Shores Golden Jubilee Committee in association with the Northern Rivers Railway Action Group and Trains On Our Tracks are working in support of the return of rail services. This will continue throughout 2019.
The return of rail services has the support of Byron Council. An extension line can be reinstated to Ballina, as in the past.
The railway line was completed in 1896 and provided a huge economic stimulus to the Northern Rivers communities. Rail is the transport of the past, and now is the sustainable transport of the future. It can be used by people of all ages, especially our youth.
Ocean Shores needs the reestablishment of the Billinudgel Railway Station. Mullumbimby station has to be re-opened. Stations at Tyagarah and Yelgun could be re-opened to service the festivals. At present it takes a nightmare journey by bus of more than three hours in the middle of the night to get to Casino station to catch or come home from a train journey. No wonder it is under used.