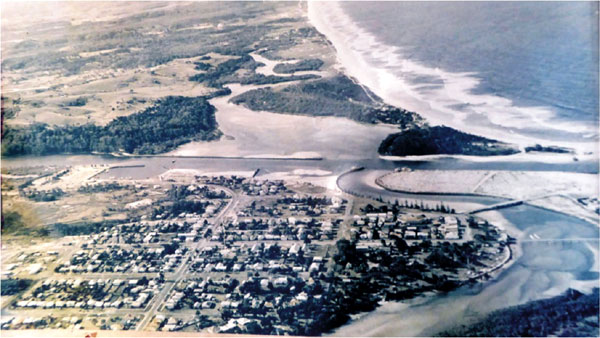 Late 1960’s photo of the Main, South and North arms of the Brunswick River where they converge at the Heads,  showing the town of Brunswick Heads and the site of the future Ocean Shores.  The open farmland north of the river is a community of dairy farms which began about the 1880’s.  After the loss of Sydney dairy quotas on the North Coast the local dairy industry went into recession.  The developers of Ocean Shores, Wendell West Pty Ltd and later Princess Properties Pty Ltd bought up many of the farms for the future town.

The North and South walls have not yet been constructed. Note the training walls at the entrance of Readings Bay. These were built by NSW Public Works to enhance the river channel for the fishing fleet which anchored at the Brunswick Heads boat harbour. In theory the walls were to stop the river silting up for the fishing fleet providing a deep channel to the ocean. In practice this was a disaster. The flow of Marshall’s Creek (North Arm) was restricted, preventing flood waters from escaping and clearing out siltation on the river. To this day, flood waters cannot escape. They back up, heading north again and flooding low lying areas including New Brighton, Ocean Shores around Balemo Drive, North Ocean Shores around the Capricornia Canal, Fern Beach, South Golden Beach and Billinudgel. As well, natural creeks acting as flood outlets to the ocean have all been blocked, adding to the scale of flooding in the district.

The fishing fleet no longer exists due to the shallowness of the river.