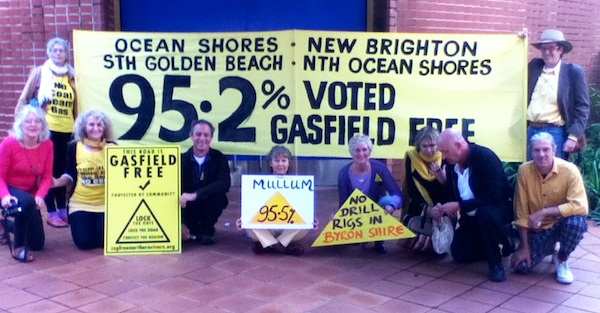 After some heated questioning Council voted on June 13, to agree that all areas surveyed can put up a permanent sign (of generic template) at the entrance/s to their towns/villages stating the percentage who voted to keep the area Gasfield Free. Yay!

Despite the inclement weather about 150 residents of Ocean Shores and surrounds participated in the CSG declaration ceremony at the Ocean Shores Public School, declaring the area gasfield free.

Setting the mood for the event were Methane Mike and two local community choirs: The Peace Choir and The Raise The Roof Choir, who sung CSG free songs.

After passing the scrolled declaration for each of the villages of Ocean Shores, New Brighton, North Ocean Shores and South Golden Beach from back to front, members of three generations of each area presented their scroll to mayor Simon Richardson.

‘2620 houses in 147 streets were surveyed by 125 volunteers,’ said co-ordinator Shelley Breda. ‘It was a mammoth task’. Another co-ordinator, Vivien Royston, told The Echo, ‘To the question, “Do you want your street to remain gasfield free, a resounding 95.2 per cent replied “Yes”’.

‘This is the largest residential area in the Byron Shire to be surveyed to date,’ she added.

Mayor Richardson congratulated the volunteers, noting that they have ‘enjoyed getting to know and engage with your neighbours.’

‘It’s important to look positively too, at what we want to be… we should be an area and a nation which is filled with alternate energy, not dinosaur energy.’ He also said that it was important to stay connected and vigilant as this is just the beginning. The Aboriginal Land Council and Dart Energy both hold licences over the northern rivers region. Dart Energy has suspended their operations but has not withdrawn their licence. Despite the tight economic situation, local businesses and practitioners donated raffle prizes worth over $1500.