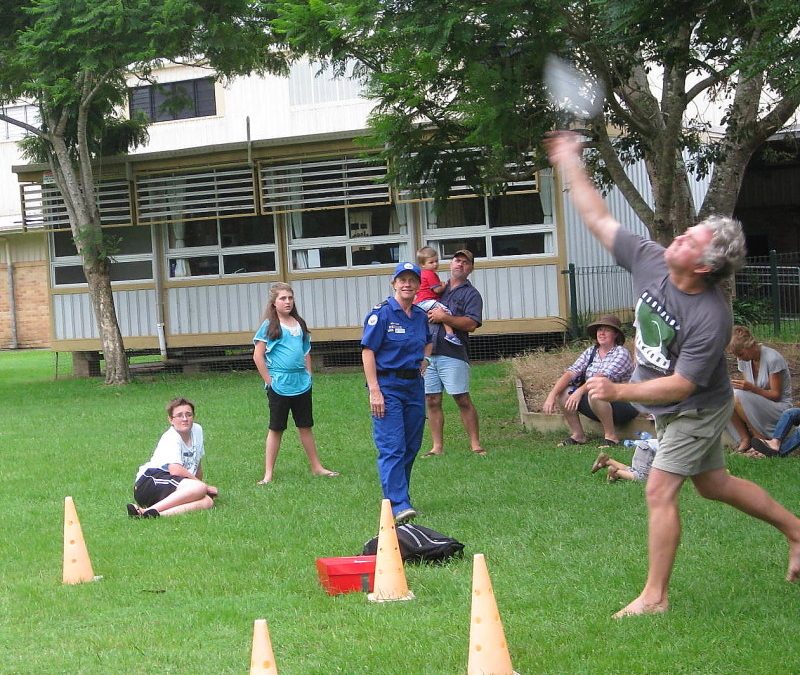 Visitor to Ocean Shores, Natasha Nozdrina of Ivanavo, Russia took out the 2012 Australia Day World Mullet Throwing Championship in the Women’s section with a 15m 70cm throw against a strong field. Natasha who is delighted with her win is hoping to return to defend her title next year. Natasha and her daughter Marsha flew back to Russia on Saturday, with the trophy in her luggage. 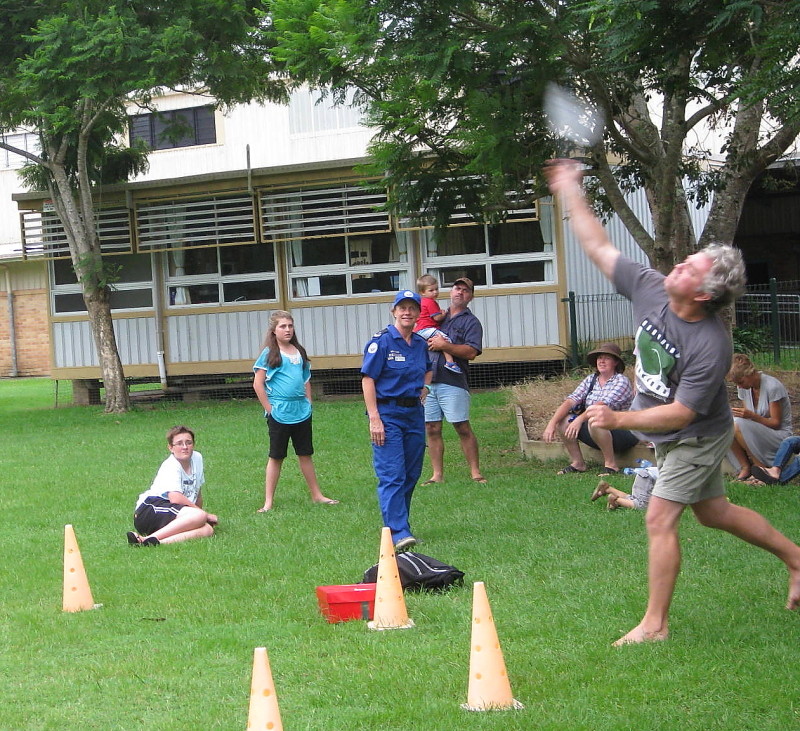 Natasha and members of her sister’s Anastasia’s family took out three sections in the popular contest. Proud parents Nick and Anastasia Ward of Ocean Shores applauded their daughter Sophia who took out the Under 10 Girls’ with a throw of the junior size 750 gram mullet of 8 m 90 cms.
Then Nick threw the senior 1000 gram wood and rubber “mullet” a record 40 metres to win the Men’s section for the second time. 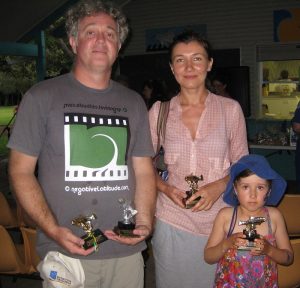 The other winners were Under 10 Boys George Russo (12 m), Girls 10-15 years Emily Smith (13.90cm) Boys 10-15 years Omri Ben Harush (21m 70cm). A special prize of the Boxing Kangaroo was awarded in a new category of the under 5’s to Yonatan Lev, who threw 6m 20 cms.
The Ocean Shores Australia Day World Mullet Throwing Championship has been run each year since 2007 when the “mullets” were made of cotton fabric filled with sand. These didn’t last very long! Improved models of rubber and wood were made by Stan Petroff and have been used ever since.

Local identity Stan Ciblinsky states it is appropriate for the town to honour the humble mullet. Being a coastal town with many creeks and lakes closely connected to the ocean, mullet can be seen leaping out of the water, especially when the paperbarks are in flower. Stan has seen large mullet leap from the water in a long run of four or five leaps. No-one seems to know the reason for this behaviour. Stan thinks it is sheer exurberance on the part of this marvellous fish. It provides very good eating as well, and is high in omega 3 and essential oils.

The extreme weather with rain and flooding forced the closure of most of the Australia Day functions in the Shire. However, the Mullet Throwing Championship and the Ocean Shores Australia Day celebrations were able to go ahead thanks to the Ocean Shores Primary School whose principal Chris Hauritz made the school hall and undercover open space available. The weather held and the mullet throwing took place in the school grounds, under the supervision of officers of the Brunswick Heads Marine Rescue. 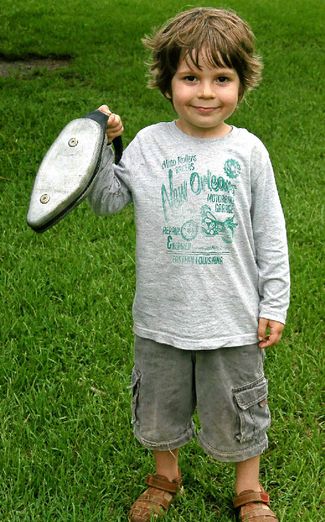 A concert performed by Slim Pickens, Stan Ciblinski, the Ocean Shores Peace Choir and an Aussie singalong led by David Hall provided wonderful entrainment throughout the evening. A sausage sizzle on the barbie was cooked by members of the Mullumbimby/Brunswick Lions Club. The children took part in facepainting and artwork on the map of Australia. This was provided compliments of the new arts organisation Arts East Inc. and Byron Council.

Ocean Shores’ resident, SES chief and the Byron Shire Volunteer of the Year Noel Macalvinny was applauded by the crowd and presented with a gift of a bottle of red wine. Noel explained the significance of the red wine. A daily glass of red had been recommended by Shirley Nelson OAM in her Australia Day address at the formal celebrations at Mullumbimby, where Noel received his award. Shirley spoke of the sense of community and the many volunteers in the Shire. The mayor Jan Barham told us that the Byron Shire had the highest percentage of volunteers in the state.

Our own Ocean Shores Community Association (OSCA) Citizen of the Year Award, was given to young mum Dr. Orit Ben Harush who gained her PhD through the Queensland University of Technology in Brisbane. A Press Release was put out by QUT announcing Orit’s award. Orit spoke to us also about the sense of community, the importance of friendships and a welcoming atmosphere as being vital to the wellbeing of a town. She named this seachange town of Ocean Shores as reflecting this ethos and calls Ocean Shores a wonderful place to live. Orit then cut the giant lamington for all to enjoy.

The Ocean Shores Community Association honours a local resident each year on Australia Day. In previous years, Frank Mills OAM, Ted Kabboutt, Athol Compton and others have been honoured. OSCA will be calling for submissions for this award for 2013. There are no age limits or performance categories. All submissions will be judged by an independent panel. The OSCA website gives details on www.osca.org.au.
The OSCA Australia Day raffle first prize of two tickets to Thursday at the 2012 Bluesfest was won by…Second Prize of a convection oven was won by … Other prizes were won by….

OSCA thanks all of the above and everyone who helped this event to be so successful.